Cooley, Coley and other close families in Connecticut and my brother Greg!

My newest puzzle and adventure started with a dna match with Mike.  Mike matched both me and Mom on Ancestry.  It is a 24cM match.  But it turned out that Mike had uploaded his results to gedmatch.  So I was able to see that his match was on Chromosome #13 in the same spot as that of Barbara Raemer's match.  And Barbara and I feel almost certain that this chromosome came down to each of us from our mutual 3-gr-grandparents, Benjamin Franklin Carey and his wife Hannah McNeely.  We had never figured out to which of the family lines this segment has connections.....Carey or McNeely.....  And almost bored (because I have already painted this segment), I wrote to Mike to see how he was connected to Ben and Hannah.  And he knew of no connection to either family.  So I looked around to see if I could find a connection to Carey or McNeely for him....without success.  So I became even more intrigued.  This segment came down to Mike from one of the ancestors of either Ben or Hannah.

Next I took a better look at Mike's tree.  Many of his early ancestors were found in Fairfield, Connecticut in the time period that Mike and I would expect to find a connection from the size of the segment that we share.  I know that the McNeely family was mostly in Southwestern Virginia in this time period.  HOWEVER, Benjamin Franklin Carey moved from upstate NY to Southwestern Virginia just after the Revolutionary War.  It seemed likely that zeroing in on the Carey family might have the best chances of finding results.

Next I took the advice of Blaine Bettinger to work on a quick and dirty tree.  Looking on Ancestry, I found a tree that belonged to Terry Lee to try to build a "quick and dirty tree" of my own.  And Terry had the answer right there in his tree.  Daniel Cooley Sr is the man who moved his family from Fairfield CT to Goshen, Orange County, NY.

Terry's tree can be found on ancestry at this URL:

You can see on the map below that there is only about 20 miles between Goshen and Wallkill (scale is on bottom right hand side of map: 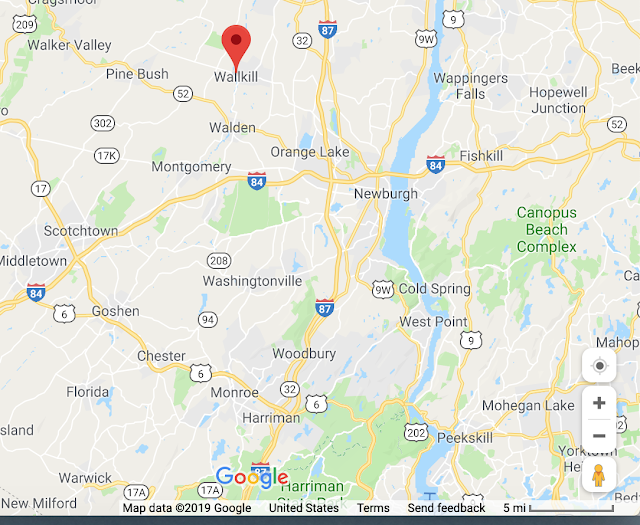 Mike and I have not yet figured out just which ancestor is in both his tree and mine.....the ancestor who gave each of us that segment on Chromosome #13.    So I have begun to look at the area in Connecticut.  I found the below map of the Towns and Counties.  And while I haven't yet spent the time figuring the area out, I did not want to loose the map.


I found the map below at:  https://www.chuckstraub.com/Letterboxing/ctmap.htm 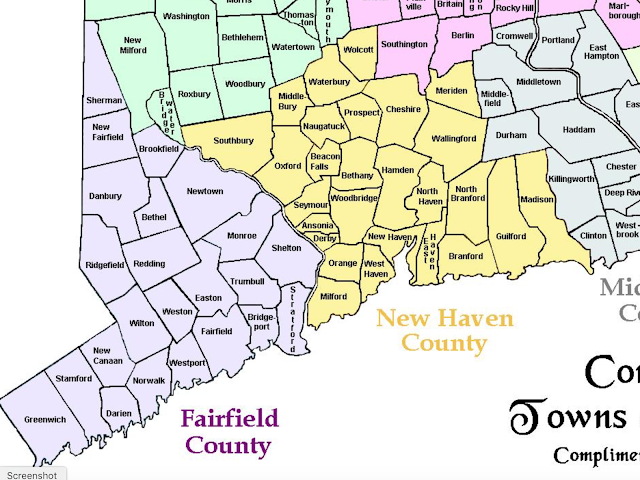 So far this new part of my tree has been a lot of fun!  But the fascinating part is that my brother is visiting for a few days for the funeral of his high school basketball coach.  And guess what.  I had honestly forgotten a very important fact.  My brother lives right there!  Right in Westport on the map above!  I guess I will be making a train trip this fall to visit!  Golf and genealogy and visiting my brother all in the same trip!  Doesn't get better than that!

It has come to my attention that the below link does not take non-ancestry members to my tree. While it works well for me, it doesn't seem to work well for others. I am working on fixing this. Try it.....if it doesn't work for you, get in touch with me and I'll try to figure out a solution. I am going to add the link for my own convenience, but I have been told that clicking on the link takes one to the main ancestry site instead of my tree specifically.
If you would like help figuring out how various ancestors are related to me and to my children, go to:
http://trees.ancestry.com/tree/41167677/family/pedigree

Blog Archive: A list of all of the posts on this site.