After spending the morning trying to figure out what we might be likely to be able to see when we arrived in Fairfield.  I decided that it made the most sense to first visit the museum there.  Much to my pleasant surprise, the library was open as well. 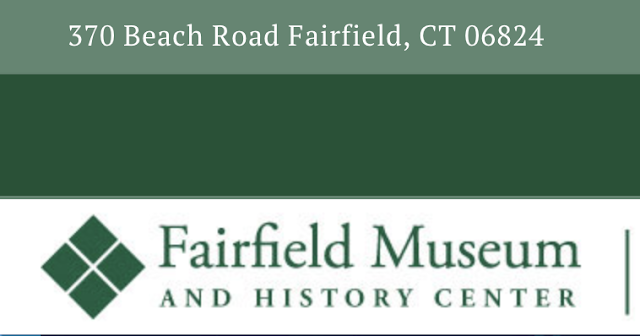 The museum is located smack dab in the middle of the historical area of Fairfield.  I had copied the map that is found in Schenck's book that showed where the original settlers lived.  The librarian found for us an exceptional book that had been compiled in 1936.  It showed the same land in three different time periods.  The first was the original settlers.  The second was 1779.  The third was 1936 when the book was written.  What made that so helpful is that some of the 1936 landmarks are still in place.  And from that I was able to identify approximately where my ancestors may have lived. 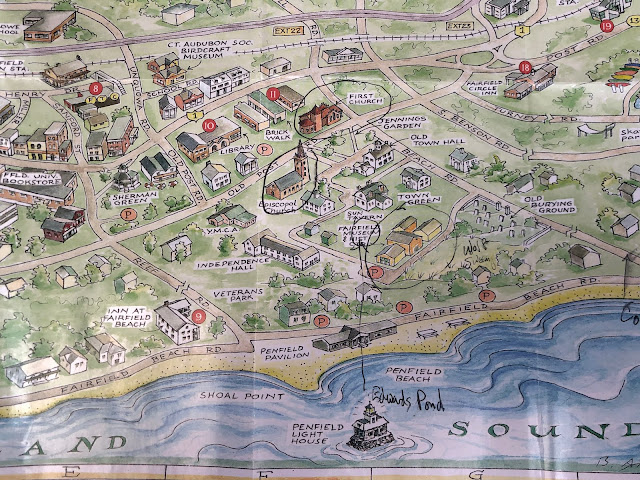 So the museum is the buildings closest to the water with a circle around it.  Between the museum and the water was a undeveloped area that would have been Wolves Swamp and the great meadow that is shown on the map of the home lots of the original settlers.  The man who seemed to be the most knowledgeable at the museum said that this naturalized area would have been huge in that time period ....not just the small amount of area that exists now.  Below is a photo of the swamp/great meadow that still exists between the museum and the water. 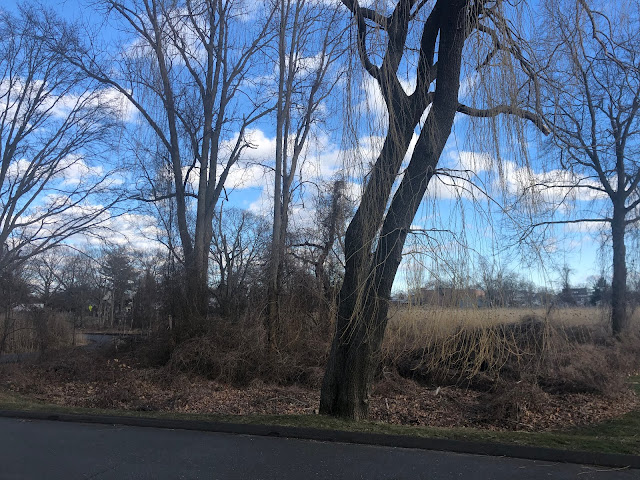 This is the first landmark for interpreting the map in Schenck's book depicting where the first settlers of Fairfield lived.

When we looked out the back door of the museum the librarian explained and others in the museum agreed that the depression that we could see was Edward's Pond.  A second landmark on the old map. 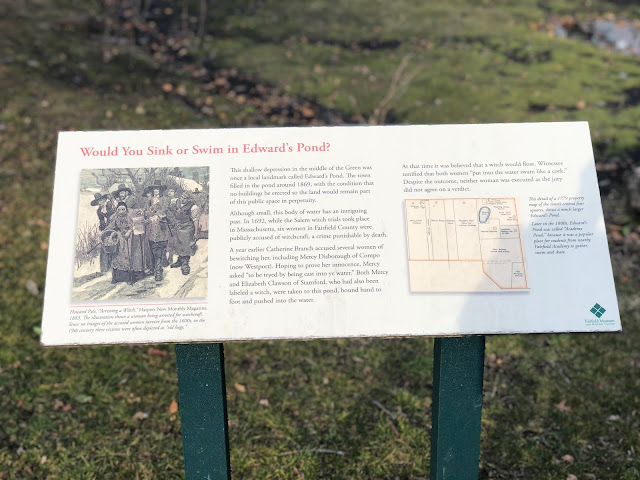 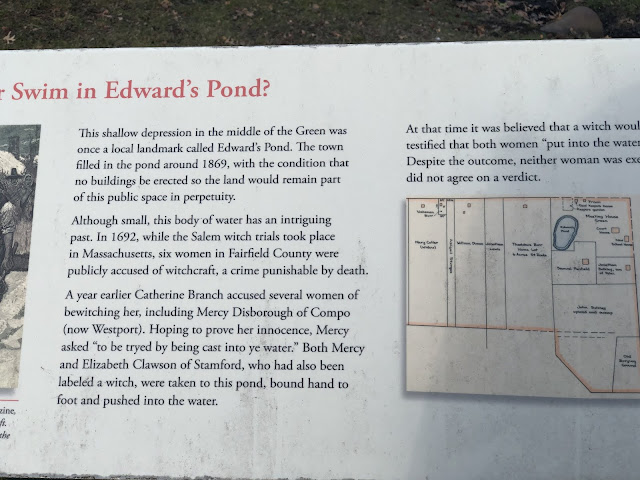 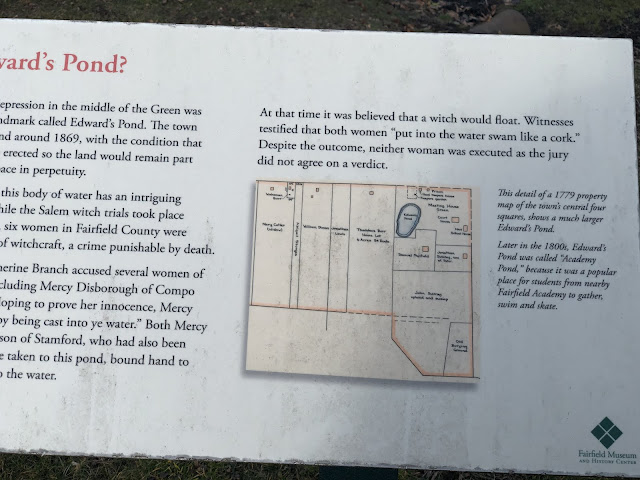 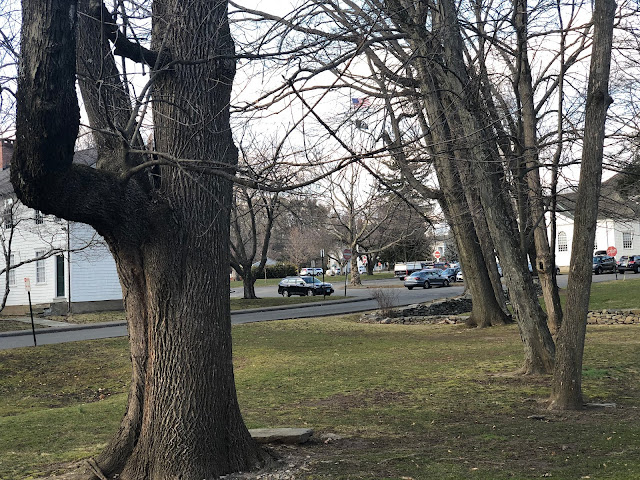 And here is the map found in Schenck's book on page 65: 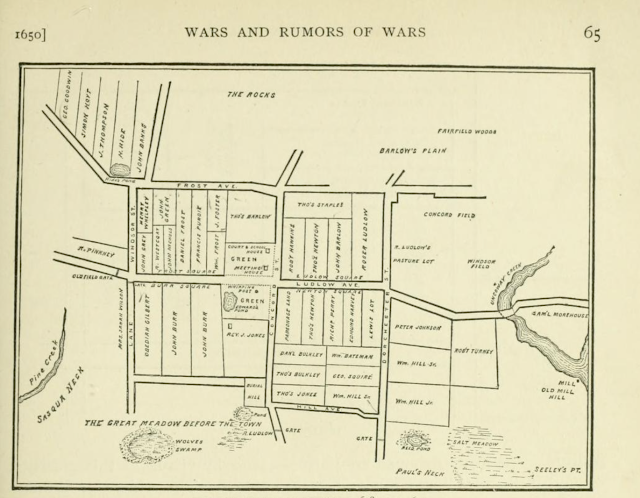 Below is a larger version of this map.  You will have to manipulate it in order to see it in it's entirety 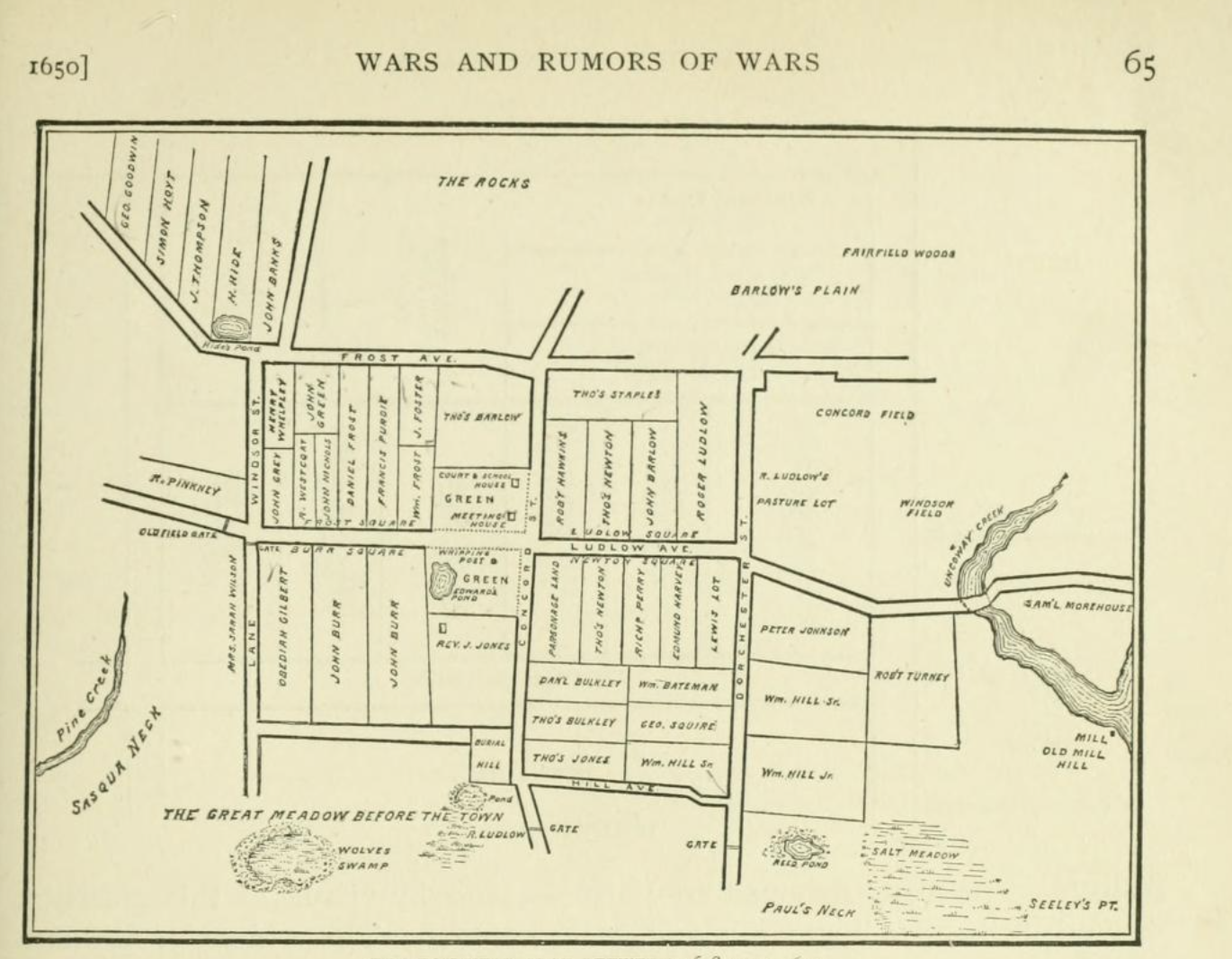 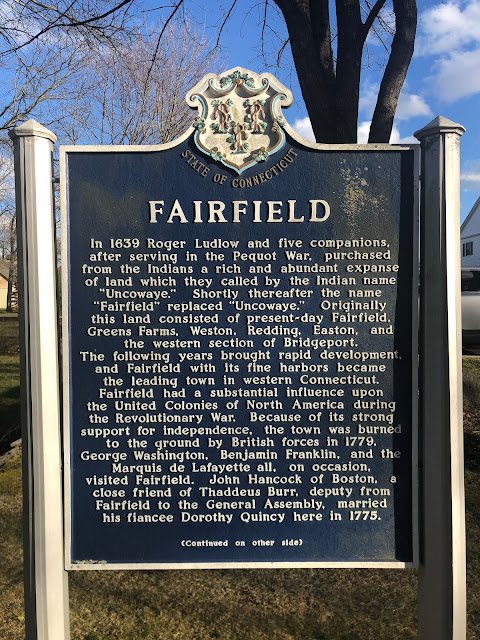 When I first finished this blog post and got ready to push update, I realized that some of my assumptions the day that we visited are not correct.  So I will go back to Fairfield on another visit and relook at the area with new eyes.  I am removing some information and saving the rest of the explanation for another day.

In the below modern map from Google you can see that the streets in the very old map above are not north-south nor east-west.   The village green would fall into place where St. Paul's Episcopal Church and First Church Congregational sits today....or just beside it.  I did see one reference somewhere this day that commented on the fact that the founding father's would "turn over in their graves"  (not exactly what the reference said) if they could now see the Church of England on their square looking smack dab at their church.  I actually found this reference after I pushed update in Schenck's book and will update this with her actual words when I have time. 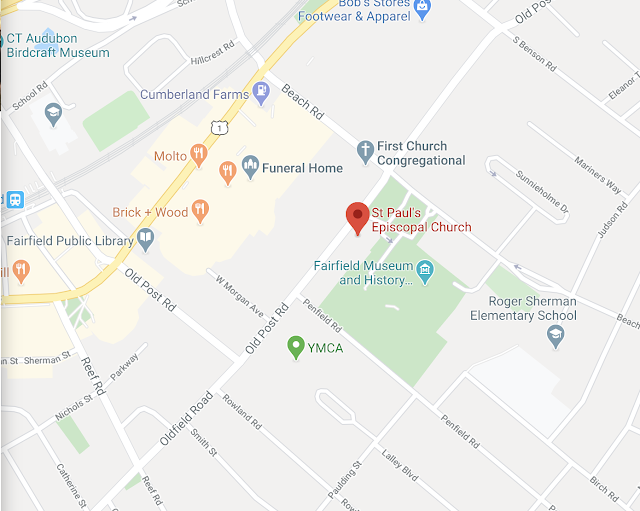 Comparing all of the maps, I believe that Humphrey Hide lived in the area shown above in the bend in the road on the map just above (modern).  This land would be where the words Public is found in the notation Fairfield Public Library.  If you look at the very first map on this blog post, it will be where the Theater is located.  And that the well platted area on the ancient map would fit into the squares that now hold the Funeral home, Museum, Episcopal church and YMCA.....more or less.  This is my best interpretation.  The comment made by the most knowledgeable man in the museum encouraged me to believe I was interpreting Humphrey Hide's land correctly.  When I asked him about it, he said yes that the old Hide pond and been drained and the theater that sits there now always has water in the basement.

But this gives the best figuring that I can do on my ancestor's land....the Hide land. 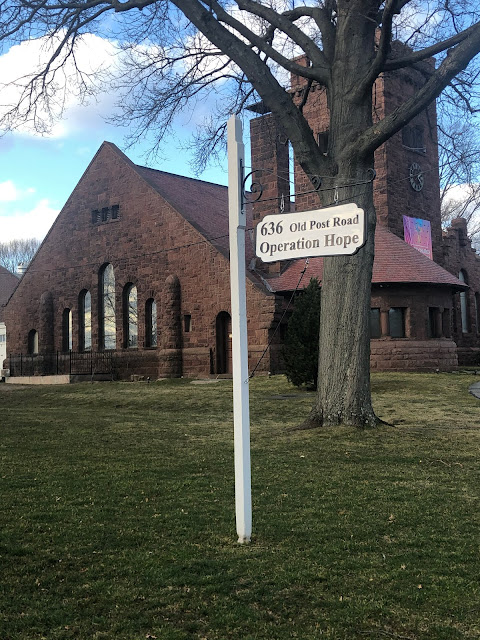 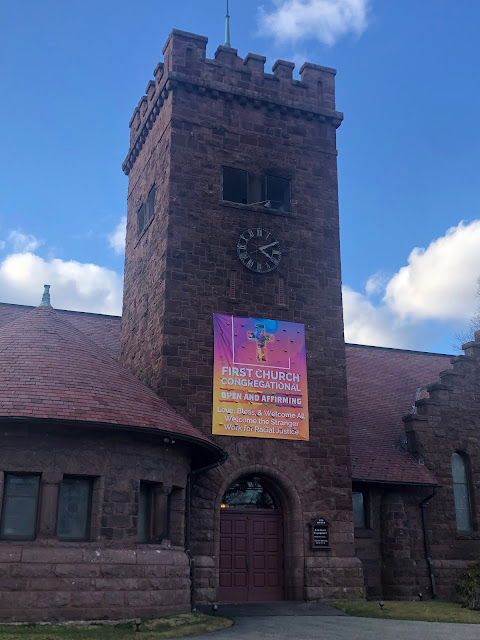 While googling to make sure that I was calling the church the right thing, I found the following information:

Puritans, then, were distinguished for being "more intensely protestant than their protestant neighbors or even the Church of England". As a term of abuse, Puritan was not used by Puritans themselves. Those labeled Puritan called themselves terms such as "the godly", "saints", "professors", or "God's children".

And further proof that I am sorting this out in a way that makes sense is the below photo of the identification of this church giving the date founded as 1639....although they use the term gathered.
Obviously this is not the original church ....this church was built in 1891. 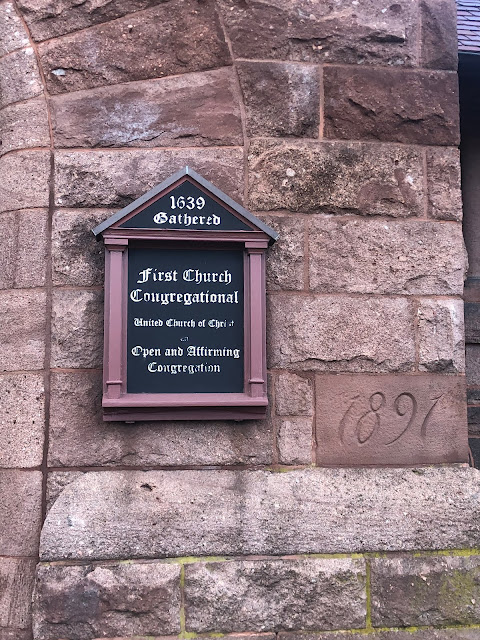 William Frost left money in his will to be used towards the cost of building the first structure to be used for services.  It is thought that perhaps a multi use building had been used before his death.  He said that his son-in-law was to give the money towards the building when it was half finished.  There is no proof that this did indeed occur.  But it shows that the church was important to our ancestor.  You will see that the original meeting house sat on the town green that is located smack dab in the middle of the village.....scroll up to the ancient map.

So where did the Frost family live?  I will work on that better next trip.

The Volumes by Schenck that are about the history of Fairfield can be found at:

I think it is also available on Google Books.

It has come to my attention that the below link does not take non-ancestry members to my tree. While it works well for me, it doesn't seem to work well for others. I am working on fixing this. Try it.....if it doesn't work for you, get in touch with me and I'll try to figure out a solution. I am going to add the link for my own convenience, but I have been told that clicking on the link takes one to the main ancestry site instead of my tree specifically.
If you would like help figuring out how various ancestors are related to me and to my children, go to:
http://trees.ancestry.com/tree/41167677/family/pedigree

Blog Archive: A list of all of the posts on this site.